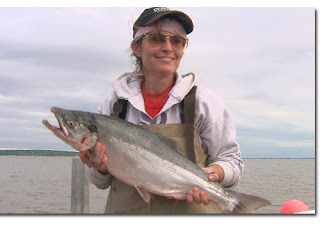 Should John McCain consider Sarah Palin "quite a catch" as his running mate? You bet.

Back on the first of February, I suggested that Republicans put the feisty governor of Alaska in their major player ranks. Yes, her national experience is limited (as I recall, so is Barack Obama's) but Palin's combination of fiscal good sense, integrity, conservative credentials (including being a member of both Feminists for Life and the NRA), her telegenic good looks, her youthfulness, her attractiveness to independents and, not inconsequential in this election, her distance from Washington's "politics as usual," make her a candidate of extraordinary value.

Other astute observers are beginning to take note of Palin as a rising star in the party, one of which is Thomas Cheplick in this American Spectator article.
Posted by DH at 10:38 AM