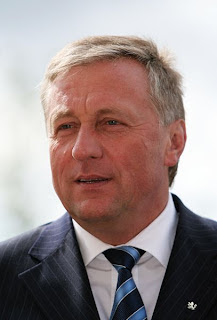 Yesterday's meeting between Czech Prime Minister Mirek Topolanek (photo at left) and President George Bush moved the United States and the Czech Republic very close to sealing the deal on a missile defense radar system on Czech soil. The complete plan involves a radar installation in the Czech Republic as well as 10 interceptor missiles in Poland.

Russia continues to stridently protest the move, claiming that the system creates a new arms race and threatens Russia's interests. And, of course, if Russia's "interests" involve bullying eastern Europe again, it darn well does!

But President Bush, nearing completion of what may well be one of the most notable achievements of his tenure in the White House, certainly as far as Europe's defense is concerned, emphasized that the system increases "the sake of mutual security and the sake of peace."

Prime Minister Topolanek concurs and he too insists that the days of eastern Europe having to kowtow to Russia are over. For instance, Radio Free Europe reports that Topolanek said that the Czech Republic will cooperate with Russia in many fields, but that it will make its own decisions regarding its internal affairs. The Prime Minister said that missile defense "is not an issue of one radar installation....It primarily concerns [our freely chosen willingness] to defend ourselves."