His License Was Yanked 5 Times But He's Driving a School Bus? 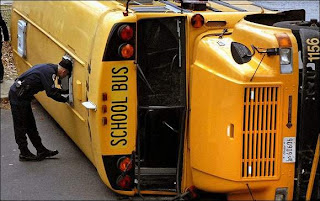 Ah, the efficiency of our government schools.

School officials in Prince George's County (Maryland) said the driver charged with speeding, negligent driving and not wearing a seat belt in a school-bus accident yesterday that injured dozens of students (at least 4 seriously) had met the district's requirements.

Well, yeah, he has had his license suspended five different times for such offenses as driving without a license, driving without a registration, failing to obey a stop sign (he didn't even bother to show up in court for that one), operating a vehicle without current license plates, and driving the wrong way down a one-way street.

Said school spokesman John White, "We felt he had a significant amount of time with a good driving record and, with some training, he could be a good driver."
Posted by DH at 11:51 AM