* Among the recommended items for this weekend's web surfing are the two posts I link to below from The Weekly Standard dealing with the wild whopper Barack Obama told at his debate with Hillary Clinton the other night. His story about U.S. troops being mismanaged and ill-equipped turns out to have more holes than a Krispy Kreme shop. ("US Troops Scavenging Weapons?" and "Obama Heard Wrong")

* Also looking at the Obama candidacy is this Michael Weiss article describing five of the current areas where he is most vulnerable to attack.; "Obama's Weaknesses Off Limits to Hillary" by David Limbaugh; and Victor Davis Hanson's comments about Obama from NRO's The Corner where, among other noteworthy things, he observes:

I think what we are watching in the Democratic primary is historic. First, there has not been a candidate nominated for President more liberal than Barack Obama since George McGovern — not Carter, Mondale, Dukakis, Clinton, Gore, or Kerry. This is unapologetic liberalism in the classic European-socialist sense, and for the first time in many years we will see its envisioned agendas without Clintonian trimming or apologetics — the flip side of the purist Goldwater in 1964...

* The New York Time's remarkably unprincipled (and ineffectual) attempt to smear John McCain gets bashed here (and not ineffectually) by the editors of the New York Post; Jacob Laksin at FrontPage Magazine; and this video feed featuring Tony Snow on the O'Reilly program.

* Striving with the New York Times, however, to become this week's inductee to the Vital Signs Blog "Hall of Shame" are: 1) Wheaton College for inviting Jim Wallis, one of the leaders of the ultra-liberal wing of Protestantism, to speak at an official college event at its Center for Applied Christian Ethics. Wallis' recent book argues that efforts to legitimize homosexual relationships in the law (including same sex "marriage") are right and just. This is the second time Wheaton has pulled this kind of trick in recent days. The formerly evangelical school invited self-proclaimed "gay Christian" activist Harry Knox to participate in a panel discussion during which he repeated the claim that his sexual preference is a "gift from God." And then there's 2) Gene Nichol, William & Mary's ex-president, whose departure was anything but graceful. I've posted about Nichol before, including the announcement of his much-welcomed resignation, but I just had to follow up by suggesting you read this intriguing Power Line article about the peccant law professor.

* "Where's The Stem Celebration?" is the cogent question asked in this Investor's Business Daily editorial. 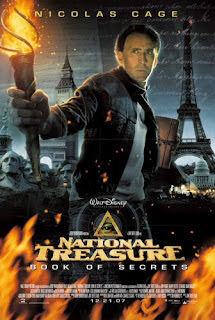 * And finally, on a lighter note, you might want to watch this brief video clip about the action movie, National Treasure: Book of Secrets. It includes a discussion by a couple of Christians about the film's themes and values. Interesting. Please note, however, that if you haven't seen the film but plan to do so sometime soon, most definitely skip this clip until after you get home from the theater as it does contain some "spoilers."
Posted by DH at 5:32 AM