China's Communist Party is Rife with Corruption, Violence and Crime: And That's from the Chief Communist! 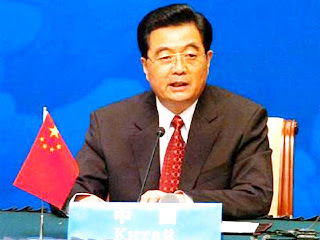 Last month Chinese President Hu Jintao gave a warning that the greatest threat to the Communist Party in his country was not the West, not capitalism, not even the growing desire of the people for social, economic and religious freedom. No, the greatest and most immediate threat was from the Party's internal corruption.

Hu pointed out that the increasing corruption within the Party was putting a huge burden on the Chinese people, causing bitterness, cynicism and a plummeting drop in the Party's approval rates. Hu said that things have become so bad as to represent a crisis in Chinese culture.

Here's a rundown on just how wild government corruption has become.

Secretary He Guoqiang of the Central Committee for Discipline Inspection said further that the recent increase in corruption-related convictions indicates that corruption and abuse of power are happening on a large scale, including "malignant criminal gang activities" demonstrated in the following areas:
* 1) cross-regional, and cross-departmental smuggling,
* 2) forming factions to control local political and economic activities,
* 3) government collaboration with gangs to control cultural and entertainment venues and organize gambling, prostitution, and drug sales,
* 4) controlling securities and financial sectors and releasing false information to produce profit, and
* 5) illegally organizing para-military police forces, operating under the banner of the government and state-run enterprises, and hiring assassins to harm political and economic rivals.

Last year alone, Secretary He explained, there were 3,144 cases of assassin attacks paid for by government agencies or state-run enterprises!

Mao Tse-Tung used to say that “Communism is not love. Communism is a hammer which we use to crush the enemy.” But I don't think he ever figured that the hammer might someday crush itself.
Posted by DH at 10:56 AM