CBS Wants Your Family to Have a Bloody Good Time with Dexter: Will You Let Them Know Your Opinion of Their Dastardly Offering? 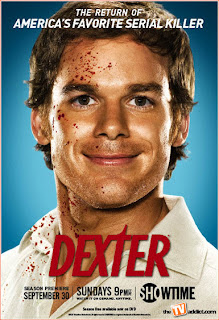 In a truly repugnant move, CBS will soon be airing on Sunday nights the grisly drama originally developed for cable TV, "Dexter" the series in which the hero is a serial murderer.

Yeah; that's right -- a mass murderer as the "good guy" you're supposed to like and root for.

..."Dexter" will air on Sunday nights at 10 p.m., or 9 p.m. in the Central and Mountain time zones. CBS claims the series will be edited for extreme violence or gore. But there is no way that CBS can edit out the central theme of this program. Dexter finds killing and dismembering human beings to be intoxicating. CBS thinks we, too, should be fascinated and intoxicated by that.

The drama is based in Miami, where lovable Dexter satisfies his taste for pork sandwiches and his blood lust for long, drawn-out dismemberment. During the day, he works as a police specialist, examining the blood spatter at crime scenes. At night, he spends his time preparing his next victim. Showtime (and now CBS) believes they have enough "moral ambiguity" in the series because he only kills other serial killers. He's a toxic avenger...

Defenders of anything-goes TV have protested that the show is on Sunday night at 10, hardly a hot time for children to be watching. But sadly, hundreds of thousands of them do. Take, for example, the second week of December on CBS. "Without a Trace," a 10 o'clock show that Nielsen estimates was watched by 269,000 children aged 2 to 11 and 465,000 children aged 12 to 17.

The same numbers will now apply to a show celebrating human butchery.

Why would CBS dare put such a show on broadcast TV? Why would CBS affiliates who care for one minute about "community standards" saturate their community with it? Dexter is not an "antihero." He's a complete psychopath, a negation of humanity, a walking black hole. But they find the whole specter to be an opportunity for cuteness: Pin the phony smile on the killer. The viewer is encouraged to see the world through Dexter's blank eyes; to share his smirky contempt for his clueless police co-workers as he buys the office donuts; to enjoy him playing a judgmental God as he saws into his guilty victims while they're still alive...

Showtime boss Robert Greenblatt boasted about his show being "exposed" on CBS. "I think it will be very compatible with their lineup as well as be a great opportunity to promote our brand on a platform that reaches every home in America." CBS ought to take that "compatibility" as an insult and consider that "brand" a stain. But they are kissing cousins in the dysfunctional corporate family named "CBS."

It almost makes you wonder if CBS is playing its own sick game, seeing how depraved a show can be and still be praised by the slavish marionettes in the cultural elites. In its first go-round on Showtime, most TV critics fell all over themselves to see who loved the "fiendishly intelligent" vehicle more. Will they stop at nothing? Is there any new low they won't hallow as artistry?

If you'd like to register your opinion about this latest "entertainment offering" (and I sure hope you do), here's the contact information:

Important too is the contact with your local CBS affiliate to register your opposition to their airing "Dexter." Inform them that that you will also be contacting the sponsors of the program, explaining that support of such a violent, irreverent program will undoubtedly lose them friends and customers.