Where Have You Gone, Frank Capra? War Films Then & Now. 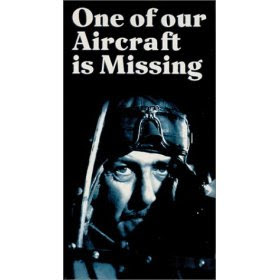 Last night Claire and I finished our work, brewed up a pot of tea and settled in downstairs to watch a movie. The one we selected (from a $6.99 military film compilation we had purchased before Christmas) was the very dramatic, very inspiring 1942 film, One of Our Aircraft Is Missing. The setting is occupied Holland in the early part of World War II with the central action involving the crew of a crippled British bomber bailing out and being befriended by Dutch partisans who then help the fliers try and escape back to England.

It is a superbly crafted film, full of tension and pathos and patriotic feeling -- a film that reminded us of a time when filmmakers invested their propaganda prowess in the national interest rather than the self-aggrandizing, smarmy sedition that has marked so many of the war-oriented films made since the 60's.

I most ardently recommend the film.

But, along with that, I also recommend popular author Andrew Klavan's perceptive article in City Journal that explores this very matter; namely, the divergence of attitudes and purposes between Hollywood's war films of yesterday (patriotic, uplifting, challenging the audience to join in the honorable pursuit of the just cause) and those anti-war productions of the modern era (moody, cynical, nihilistic...and boring).

The article is entitled "The Lost Art of War" and in it Klavan carefully examines the pronounced differences in plot, purpose and style of these competing film ideologies. With striking examples and perceptive insights into both the politics and artistry involved, Klavan makes a convincing case that the war films of Ford, Capra, Dwan, Ludwig, and others working in the 40's and 50's not only served the national interest much better than the leftist-themed movies of a later generation...but they were much better movies, period. More articulate. More dramatic. Truer to life. And immensely more popular with movie audiences.

So, before the weekend comes, make sure you read through Andrew Klavan's "The Lost Art of War" over there at City Journal. You'll find the piece refreshing, stimulating and with a few excellent ideas for what war movie classic you might pick up for Saturday night.
Posted by DH at 9:54 AM