What Can McCain Do to Allay Conservative Fears? 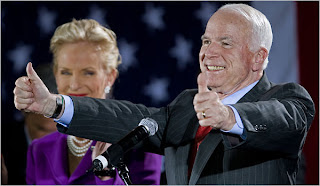 For your election fix this morning, why not try this National Review Online symposium? There they have asked the question, "It’s looking more and more like John McCain could be the Republican nominee. What can he do to rally conservatives? Can he?", of Alvin S. Felzenberg, Victor Davis Hanson, Hugh Hewitt, John J. Pitney Jr., Ed Whelan and Mona Charen.

My favorite response was Charen's (printed below) and yet several others make strong pragmatic appeals for conservatives to now rally around the old warhorse. For instance, Hanson writes, "I pray that John McCain can rally the base — since whatever anger conservatives hold toward him should pale in comparison to the specter of 16 years of the Clintons or Barack Obama’s European-style democratic socialism...". Hanson also does the best in suggesting practical steps McCain should make to win over frustrated conservatives.

But again Mona Charen's comments go to the heart of just why conservatives are frustrated with the fickle fellow in the first place:

McCain’s phosphorescent patriotism (including his sacrifice for the country) has always been his greatest selling point and will continue to win respect and affection from conservatives as the general election approaches. Though admittedly he has a sense of humor, he has delighted in sticking his finger in our eyes on many occasions. Also, his ferocious defensiveness about his own honor often takes the shape of impugning the motives of those who differ with him.

On domestic policy he is not a conservative. As between Romney and McCain, Republican voters in Florida were asked to choose between a recent convert (if you will) and a false flag. Take abortion: McCain has touted his Senate record, but that misses his tone and affect. In 2000 he told The San Francisco Chronicle that “certainly in the short term or even in the long term I would not support the repeal of Roe v. Wade.” He backed off after conservatives howled, but the same lack of commitment on the question was revealed in his support of stem cell research.

McCain/Feingold was an assault on the constitution. The immigration bill was utterly heedless of the concerns of the majority of the conservative electorate. Yes, he’s been fine on spending, but let the New York Times show a little ankle and McCain gets weak in the knees.

On foreign policy, McCain remains a most admirable hawk. All honor to him for being right about the surge. But then there are weird failures of understanding on other matters. McCain believes Bush wasted seven years by not seeking negotiation between Israel and the Palestinians sooner! You simply cannot get more conventional Washington, D.C., thinking than that.

I don’t think McCain will reach out to conservatives. He probably believes (not without some justification at this juncture) that it’s up to us to come to him. But every time I take a step in his direction, I’m reminded of some other apostasy (taxes!) and I recoil.
Posted by DH at 9:44 AM