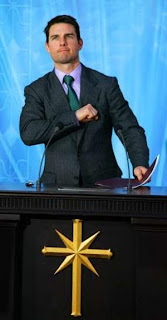 Andrea Peyser of the New York Post gives us her take on the weird, wacky "authority on the mind," Tom Cruise. And, on the off chance that you think Andrea is a bit harsh in her evaluation, the evidential video of the arrogant loony is right there for you to see for yourself. (Actually, the video link has already been yanked. But you can still see it here.)

It will make your day.

We always knew the Tomster was a bit, well, unusual. Strange, hyperactive, agitated and short. And Katie Holmes was clinically insane. Which means poor baby Suri, father currently in dispute, was in deep trouble.

But yesterday, I heard Tom boast about his ability to "bring peace and unite cultures." He bragged about his capacity to "rehabilitate criminals," and his skill in creating "new and better realities."...

We can no longer deny it. Tommy is out of his cotton-pickin' gourd.

If ever there was evidence that Tom poses a threat to a house plant, let alone a minor child or adult woman, it's contained in a videotape he made on behalf of his religion, Scientology. I got to see it yesterday. It is Tom Cruise: Unhinged.

In the video, he claims to be among the few who can really help victims of traffic accidents. He puts himself among the few whose counsel world leaders seek. But why? Because he's one of those who "know."

LA authorities have made a tragic mistake. They've taken the kids from pop slut Britney Spears, and allowed the Cruiser to breed unchecked...
Posted by DH at 8:48 AM