Below I print a quick assortment of items from my March for Life 2008 notebook. I'll give a few more (and perhaps also some remarks from Claire, Bev, Ruth and Dick) in the days to come. The notebook also covers other activities besides the March itself and, for this year's three-day field trip, that meant visits to Arlington Cemetery, the various monuments, our prayer tour of the Court and Capitol, the Blogs 4 Life conference, a fascinating visit to the bell ringers room of the National Cathedral, the new International Spy Museum, the National Gallery of Art, and more. Here we go... 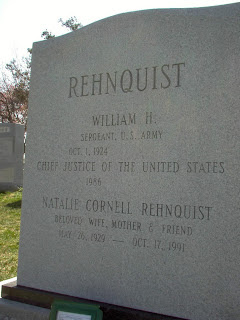 * As a Christian I well understand that the personalities of the dead are not present in the graves that hold their remains. Nevertheless, I felt a sense of satisfaction that the grave of William Rehnquist, one of the two persons on the Supreme Court who voted against the travesty of Roe v Wade, was not in the same little collection at Arlington Cemetery where abortion supporters William J. Brennan, Jr., Potter Stewart, Thurgood Marshall, and Harry Blackmun were interred all in a row.

The bodies of William O. Douglas and Warren Burger, two others who voted for Roe are also there at Arlington. The two other members of the Burger Court who presided over the case are also dead now but buried elsewhere. Abortion supporter Lewis F. Powell, Jr. was interred in Richmond, Virginia whereas pro-life stalwart Byron White's remains are in Denver, Colorado.

* Harry Blackmun's headstone has etched into it these words: "Honesty. Integrity. Compassion. Courage." An ironic claim indeed for the architect of the decision which unleashed the cruel holocaust of abortion on America's preborn children. 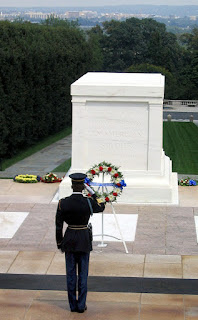 * One of the most disturbing moments of our time at Arlington was when I noticed some teenage girls playing cards in front of the Tomb of the Unknown Soldier. The girls were part of a Catholic school group in town for the March for Life the next day. The fact that they were so uncaringly oblivious to the solemn, sacred atmosphere of the Tomb was remarkable enough. But that none of their classmates or even adult sponsors would put a stop to their crass behavior was more troubling still.

* Our prayer meeting at the steps of the Supreme Court Monday night was intense. And, despite the darkness and the cold, we spent quite a bit of time there interceding with God for our nation and for the Church. After a while, we turned our faces west towards the Capitol and prayed for Congress and the weighty matters that our Representatives and Senators are charged to act upon. We continued our prayers for various government agencies as we drove through Washington and, as we came to the White House, for President Bush and his successor. Finally, a few more prayers as we walked around the Vietnam War Wall and memorial statuary, the Korean War Memorial and the Lincoln Memorial. It was a profoundly moving evening.

* The Blogs 4 Life Conference hosted by the Family Research Council was quite good this year. Being in town more for the March for Life than anything, we did not take in the afternoon sessions nor were we even able to hear the last speaker of the morning but the ones we did catch (except for a couple of clunkers) were really good. We were especially enlightened and encouraged by Jill Stanek, Barbara Curtis, Dawn Eden, Sam Brownback, Judie Brown, Phil Kline, Maggie Datiles and, of course, long-time pro-life champion, Chris Smith (photo at left). We would have liked to hear more from Kevin McCullough too but his duties as emcee limited him to just introducing others.


Barbara's testimony was rich and joyous and her counsel on blog improvement was terrific. Jill is savvy, engaging and, like Barbara, very practical. Her unassuming honesty and helpfulness to other pro-life bloggers is of tremendous value. Also, Dawn's advice on how blogs must evolve with the new technologies was spot on.

Then came the other speakers...folks who didn't have much to say about blogging philosophy or technique, but who nevertheless had content-oriented talks we could all use. Brownback served as a cheerleader for a "pro-life, whole-life" perspective and for the fellow he's endorsed for President, John McCain. Maggie gave an interesting review of the dramatic escalation of pro-life legislative efforts. Judie Brown gave a polite and relevant reminder (especially in light of Maggie's presentation and another by Michael New) that educational activity is what's really moving the decline in surgical abortions. Kline's spirited talk dealt with his experience against such heavyweight foes as abortionist George Tiller, abortion supporter and disgraced adulterer Paul Morrison, the mainstream media and Planned Parenthood. 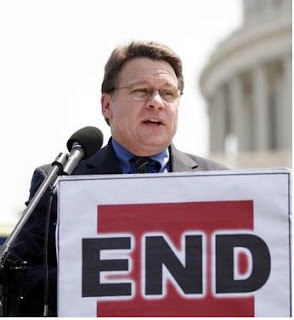 And finally, Chris Smith. The veteran New Jersey Congressman who has been a pro-life and human rights hero for so many years was in fine form that morning. First off, he punctured Barack Obama's recent hypocrisy over the "empathy deficit." Then he reiterated the grim wickedness being performed by Planned Parenthood and fellow-travelers. He explained how there is a new push for abortion around the world being led by Planned Parenthood, the United Nations, ngo's like Amnesty International and Human Rights Watch, and the Communists of China. And with these new waves of death that break the bodies of unborn children come other horrors too, including an escalation in human trafficking.

With Smith concluding, it was time for us to book down to the March in time to catch all the activities there and so we bundled up, unfurled our banners and headed out for a 12-block walk to the mall. What we saw and heard there? Well, that's for the next Vital Signs Blog posts, a special weekend edition that I promise to upload tomorrow night (after our sidewalk counseling and the Walk for Life down in Lincoln).