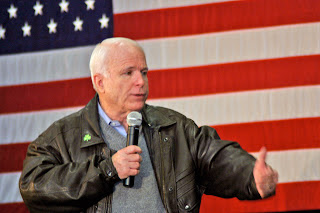 "The 'never for McCain' crowd is noisy, but it is mostly outside regular party ranks (Rush Limbaugh and former Texas Rep. Tom DeLay, for example). McCain is getting support from such non-predictable Republican conservatives as Jack Kemp and Sen. Tom Coburn (Okla.). The Republican tendency to coalesce around a leader will grow if McCain wins the January 29 Florida primary."

That's the assessment from Bob Novak. He continues, "One of the most peculiar in the array of celebrity endorsers who went to South Carolina to stand by McCain's side was Sen. Joe Lieberman (ID-Conn.). He votes consistently liberal in the Senate on just about everything but Iraq, but is acclaimed by Republican voters for getting elected in '06 as an Independent despite losing the Connecticut Democratic primary on the war issue. He was cheered and applauded by conservative South Carolina audiences as a conquering hero. There will be no McCain-Lieberman ticket, but Lieberman illustrates McCain's appeal outside the Republican box."

My note --- McCain's endorsement list also includes Kansas Senator Sam Brownback, who many believe dropped out of the Republican race for the presidential nomination just a little too soon. Given the heterodoxy shown by the current group (McCain out of step with conservatives on free speech, immigration, party loyalty, etc.; Huckabee being way too friendly towards a nanny state; and Romney with his well-earned reputation as an opportunist and adherent of a very strange religious cult), Brownback would have had the experience, conservative credentials and gravitas to have drawn a lot of attention his way.

But that's water under the bridge. Brownback is backing McCain...and forcefully too. For example, Brownback was the only person among the gang of politicians on the March for Life platform last Tuesday to refer to a specific Republican presidential hopeful. He did so by telling the huge crowds there that John McCain was on "your side" in the pro-life cause and then he read from a McCain letter.

Conservatives looking for a candidate to get behind are beginning to feel pretty desperate, especially after the exit of Fred Thompson from the race. And though they've got plenty of reasons for trepidation due to McCain's maverick meanderings over the years, endorsements from folks like Brownback, Coburn, Norman Schwarzkopf, and South Dakota Senator John Thune may be enough to draw them in.
Posted by DH at 8:52 AM