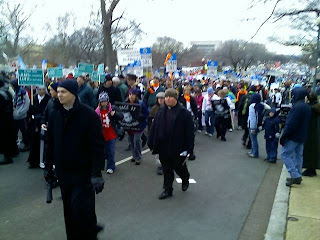 Continuing the reflections on the Vital Signs Ministries' "field trip" to Washington for the annual March for Life began last week, I'll start today with provocative points made by Dick Loneman and Ruth Denzler:

* As were all of us, Dick was really moved by our time at Arlington Cemetery the day before the March. He was especially grieved about how the sacrifices made by our nation's warriors for freedom and justice have been so abused by the hedonists and secularists who make up our modern political and cultural elite. Did our fallen heroes give their lives for the kind of America we have today? An America that debases its heritage, scorns morality, and murders preborn children by the millions? Of course not. And the knowledge of how their sacrifice has been so distorted makes this place all the sadder.

* That evening the five of us Omahans spent time at the Lincoln Memorial and at the nearby monuments honoring those who served in the Vietnam and Korean wars. It was dark and cold but yet there were a lot of people (in town for the March) engaged as we were in somberly viewing these places. Dick noticed how the teenagers' mood changed from the laughter and frolics when they first got off the buses to a quieter, more respectful tone as they walked up to see the huge statue of Abraham Lincoln or as they gazed at the statues of the soldiers and nurses at the Vietnam War memorials.

*Also, as we slowly stepped along the Wall of Remembrance there at the Vietnam Memorial, Dick asked me, "If every American abortion victim had a name on panels like these, how far would we have to walk to reach the end of them?" Too far, my friend; much, much too far.

* Following her return home from our three day experience, Ruth Denzler wrote: "I have wanted to go on the March for Life for years. I am so thankful to God and my husband for the opportunity this year to go."

"We went to the Family Research Center for a bloggers conference Wednesday morning before the March and this really impacted me. I have enjoyed Denny’s blog and knew it was a good and right thing but I did not realize the power and extent blogs have. I have viewed them as informational and a way to activate and motivate, but now I believe they are a tool that can change hearts too. There is immediate access to people, lots of people, and they have the ability to respond. What a great way to connect with someone on a fairly personal level, to answer questions and to ask questions. Information is available that is not available anywhere else. It is limitless!"

* Ruth continued, "Another thing that really touched my heart was hearing about the impact that the organization Silent No More is having on the abortion debate. For instance, at the end of the March when the immense crowds end up at the Supreme Court, there were men and women who have gone through the abortion experience sharing their stories. It was so powerful. Each one told of the agony and long term affects, both emotional and physical, that the abortion had caused. And each one told of the FREEDOM they received when they admitted their sin, repented and received God’s love and forgiveness. They each talked about the lies they had chosen to believe."

"I understand that not everyone is required by God to give such testimonies or even needs to be public about their abortion, but those that are have a great opportunity to make a difference in the lives of others both in comfort and, more important still, in preventing them from making the same tragic mistake. What an opportunity to educate and to evangelize! I would like to see them sharing in the schools and in the churches. It is certainly a prayer opportunity!! Let’s talk to our pastors and Christian Education leaders. 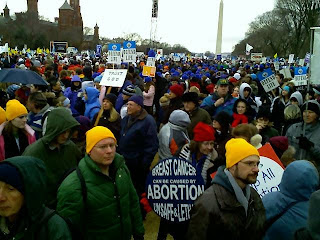 * Ruth concluded her note with this. "The March itself was very exciting. It was great to be a part of history and to be encouraged by the numbers of so many like-minded people. But, as we've talked about for many years, it was also disappointing to note the lack of Protestant participation."

* After returning home, Ruth sent over some photos, including those illustrating this post. She also watched a tape of the C-Span coverage of the March and was impressed all over again. "Just finished watching the March on television. WOW! A much better perspective of just how large it is! So sad and solemn...yet powerful, determined and encouraging." Then knowing that I might post her comments, Ruth added a little message for visitors to Vital Signs Blog: "Next January, if you haven’t gone to the March for Life for awhile, I would strongly encourage you to go. Don’t just consider it, do it!"

More comments from Claire and I about the March tomorrow.
Posted by DH at 11:26 AM