John McCain: The ACU Rating Shows He Ain't All That Conservative 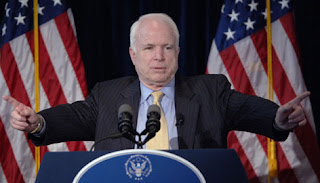 Senator John McCain's lifetime rating of 82.3% from the American Conservative Union is often cited as proof that he is conservative. Here is a closer look at that 82.3 rating.

First, a rating of 82.3 is not really that high. It puts Senator McCain in 39th place among senators serving in 2006, the latest year for which the ACU has its ratings posted online. For that most recent year in particular, McCain scored only 65, putting him in 47th place for that year. Ben Nelson (D-NE) and Chuck Hagel (R-NE), for example, scored 64 and 75, respectively, in 2006.

What this means is that McCain's ACU ratings since 1998 put him on the liberal side among Republicans. The few Republicans consistently more liberal than McCain would be Chafee (formerly R-RI), Collins (R-ME), Snowe (R-ME) and Specter (R-PA). One could expect senators from northeastern states to be more liberal since their constituencies demand it, but McCain represents the fairly conservative state of Arizona. (Arizona's other senator, Kyl, has a lifetime rating of 96.9, and half the representatives from there have ratings of 94.7 or higher.)

How much more liberal would McCain vote if his constituency put even the slightest pressure on him in that direction?

(Source: "McCain's ACU Ratings" by Randall Hoven in today's American Thinker.)
Posted by DH at 10:30 AM