S. Fred Singer is the founding director of the National Weather Satellite Service, a research fellow at the Independent Institute in Oakland, and professor emeritus of environmental science at the University of Virginia. This op/ed piece published in the Detroit News argues against those muddle-headed judges who are using political-correctness instead of hard scientific facts to further take away American freedoms. It is an eye-opening article and I recommend it to you. Here are a few excerpts: 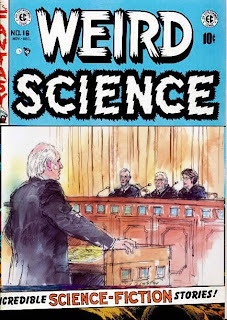 The Ninth U.S. Circuit Court of Appeals in San Francisco ruled late last year that the National Highway Traffic Safety Administration must consider the "risks of global warming" when setting gas-mileage standards for light trucks, minivans and SUVs. Central to the court's ruling was the claim that the federal agency, in violation of the National Environmental Policy Act, had ignored the benefits of reducing emissions of the greenhouse gas carbon dioxide.

Whatever their legal acumen, Judge Betty Fletcher and her colleagues on the bench demonstrated they have little expertise in climate science. Tighter restrictions on carbon dioxide emissions cannot produce the imagined benefits. Greenhouse gas emissions occur globally: The court's mandate will not measurably curb carbon dioxide levels or global warming.

The court also assumed that human activity is the main cause of global warming. This has yet to be demonstrated by hard evidence...

Human activities -- such as transportation and industrial production -- contribute little to global warming. The claim that greenhouse gas emissions are responsible for rising global temperatures is based on computer models. But as NIPCC confirms, key temperature readings contradict the models. For example, while all greenhouse models show temperature trends rising with altitude in the tropical troposphere -- the lowest portion of the earth's atmosphere -- weather balloon data show the opposite: a cooling trend. The models are wrong.

Greenhouse warming has been significantly overestimated. NIPCC has found that the models exaggerate the warming effect of greenhouse gases by ignoring "negative feedback" from -- that is, the possible cooling effects of -- clouds and water vapor. Taking this into account, greenhouse warming might amount to no more than one-half of 1 degree Celsius by 2100, well within the climate's normal range of ups and downs.

The leading cause of observed climate warming appears to be variability of solar emissions and solar magnetic fields. The U.N. panel ignored a substantial amount of recent research on the effects of solar activity on climate change. This evidence suggests that climate changes are essentially unstoppable and cannot be influenced by controlling carbon dioxide emissions.

Government efforts to curb greenhouse gas emissions will have little effect on the environment. The requirements of the 1997 Kyoto Protocol and the 2007 Bali Climate Declaration cannot influence the natural factors controlling the climate. Similarly, massive government efforts to replace fossil fuels with ethanol, bio-diesel, and wind and solar power will have little effect on the climate. Besides, they are uneconomic and require large subsidies.

In view of these findings, the Department of Justice should appeal the Ninth Circuit's ruling to the Supreme Court. Doing so would also provide an opportunity for the high court to revisit its April 2007 decision in Massachusetts v. EPA -- in which it ruled that the Environmental Protection Agency has the authority to regulate carbon dioxide as a pollutant.

This time around, the White House should be better prepared to argue its case. Science is on its side.
Posted by DH at 11:15 AM