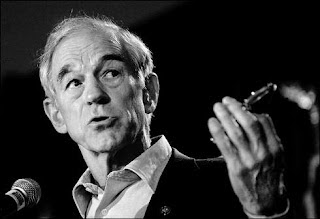 Nathan Tabor wryly comments in this Town Hall column about Ron Paul's mean-spirited response to Mike Huckabee's Christmas ad. Interesting reading. Tabor suggests, for instance, that the Congressman's reaction not only shows an excessive and ugly bit of political paranoia but perhaps something even more disturbing.

...Earlier this week, presidential candidate Mike Huckabee released an ad titled “What Really Matters.” In the ad, he referred to “the celebration of the birth of Christ” and wished voters “Merry Christmas.” When Fox News asked Ron Paul for his take on the ad, Paul quoted Sinclair Lewis on “fascism carrying a cross” and accused Huckabee of positioning himself as “the only Christian running [for president].”

Leaving aside the question of whether Sinclair Lewis ever actually wrote what Paul attributed to him, one has to wonder what Paul was thinking.

Such a remark does absolutely nothing to hurt Huckabee; rather, Paul looks unhinged and out of step with the public. After years of politically correct nonsense about “keeping religion out of the public square” and increasingly frivolous lawsuits by the ACLU, many Americans would like to enjoy Christmas absent the intrusion of politics. Paul’s comment dredges up the past few years of the culture wars at a time when most Americans would like to tune out the political horse race in favor of quality time with their families. For a candidate whose claim to fame is his fervent grassroots support, Paul has quite the tin ear.

Worse still, Paul’s comment serves to reinforce the idea that out of the Republican field, Paul’s niche role is “the paranoid guy.” Obviously, an ad wishing voters a “Merry Christmas” has nothing in common with the doctrines of Hitler or Mussolini. Whether or not Paul meant it as such, his insinuation to the contrary is deeply insulting to the millions of Americans who profess to follow Christ.

Taken with other positions of Paul’s, such as his tendency to blame attacks by al Qaeda on American policies, and his dire warnings about the paper dollar and the Federal Reserve, one must seriously question his judgment. Problems such as illegal immigration, the war on terror, and the culture wars are grave matters that will require clear-eyed leadership and a discerning mind. Frankly, the last thing we need is a leader who sees problems where none exist, and views existing problems as impending disasters...

Newsday columnist James Pinkerton also weighed in on the matter:

Is Mike Huckabee a fascist? That's the insinuation from Ron Paul, one of Huckabee's rivals for the Republican presidential nomination. And it's a cheap shot. One needn't agree with, or even like, Huckabee to know that throwing around the f-word "fascism" is a low blow.

This story is important, because it speaks to the larger question of whether Christians can fully participate in politics without being slurred. Here's the context: Huckabee ran a TV spot in which the former Arkansas governor wishes Americans a "Merry Christmas." And in the background, there's a windowpane, or some shelving, that looks a bit like a cross.

On Fox News on Tuesday, Paul was asked his opinion of the spot. The Texas congressman declared: "It reminds me of what Sinclair Lewis once said. He says, 'When fascism comes to this country, it will be wrapped in the flag, carrying a cross.' "

Then Paul caught himself a little: "Now, I don't know whether that's a fair assessment or not, but you wonder about using a cross, like he is the only Christian or implying that subtly." It's hard to know if Huckabee was pitching his Christianity. But it's easy to know that Paul smeared Huckabee.

The author Sinclair Lewis is remembered for skewering Protestant evangelicals in his 1927 novel "Elmer Gantry." Then in 1935, Lewis' "It Can't Happen Here" took one step further, envisioning a fascist takeover of the United States, led by a cornpone politician in league with religious-radio demagogues. In other words, Paul, by citing Lewis, must have known he was invoking the name of a fiercely biting critic of religion in America. Faith-minded Republicans might take note, as they ponder Paul...