Is Fox News Falling Under the Influence? 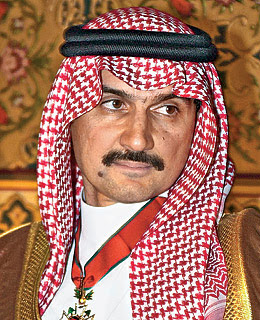 Joe Kaufman writes in FrontPageMagazine about a new and possibly prejudicial influence in the Fox Network.

Fox News has long been considered a beacon to those that distrust televised liberal media, meaning every channel other than Fox. One of the indicators of the station’s right-leaning bent is that it has, for the most part, gotten the ‘War on Terrorism’ correct. However, with the undue influence of a Saudi Prince related to militant causes and with this month’s acquisition of Beliefnet, a religious resource website that proudly promotes radical Islam, signs show that the war coverage may soon be taking a turn for the worse.

In September of 2005, Saudi Prince Alwaleed bin Talal purchased 5.46 per cent of Class B voting shares in News Corp, the company that owns Fox News and a number of other media and entertainment entities. This had replaced the three per cent stake in Class A non-voting shares bin Talal had previously held through his investment corporation, Kingdom Holding Company (KHC).

With his newfound voting rights, bin Talal stated his intention of supporting Rupert Murdoch, the principal owner of News Corp, helping Murdoch to stay in power and avoid hostile takeover by other interested investors. Some have said that this was like making a deal with the devil, as Murdoch has been left vulnerable to the whims of an individual that has been involved in despicable causes.

In April of 2002, bin Talal had donated $27 million during a Saudi telethon that was raising money for the families of suicide bombers. As well, he had given $500,000 to the Council on American-Islamic Relations (CAIR) to be used towards the distribution and propagation of a set of Islamist books for American libraries. The set included Jamal Badawi’s Gender Equity in Islam, which sanctions the beating of women by their husbands, and a version of the Quran, Abdullah Yusuf Ali’s The Meaning of THE HOLY QURAN, which has been banned by the Los Angeles school system.

Utilizing his position of power within Fox News (today, he is the second largest shareholder), bin Talal has worked to influence programming at the station. An infamous example of this was reported in a December 2005 article found in WorldNetDaily, stating:

During the violent street protests in France one month ago, the prince said, Fox News ran a banner at the bottom of the screen that said “Muslim riots.”

“I picked up the phone and called Murdoch ... [and told him] these are not Muslim riots, these are riots out of poverty,” al-Walid said.

“Within 30 minutes, the title was changed from Muslim riots to civil riots.”

This incident was precisely the type of scenario that then-Mayor of New York City Rudy Giuliani tried to avoid, when after the 9/11 attacks, he rejected a $10 million check from bin Talal for the renovation of New York, that was attached to statements made by the Prince critical of the United States’ relationship to Israel. The question now is how many more incidents, such as the one concerning the French Muslim riots, have occured without the notice of the American public? And how far has bin Talal’s influence been able to reach?...

Here's the rest of Kaufman's disturbing story. As a follow up, you might send along a quick note to Fox News, urging them to maintain the quality, the balance and the forthrightness that Americans have so far appreciated in Fox News. My note (sent to yourcomments@foxnews.com) is printed below as an example.

I've just read Joe Kaufman's piece in FrontPageMagazine.com and I agree with his concerns that the investment strength of Saudi Prince Alwaleed bin Talal might be prejudicial to Fox's heretofore excellent news coverage. I urge you to please maintain the quality, the balance and the forthrightness that Americans have so far appreciated in Fox News and to take all pains necessary to avoid the very serious mistake of allowing any investor to unduly affect the completeness and fairness of Fox's news coverage.

Thank you for your consideration of this request.