He of the Long Nose? Mitt Romney's Troubling Exaggerations 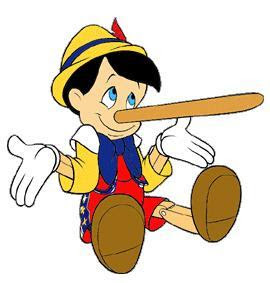 Being caught in lies has ended more than one politician's hopes for higher office. Will that be the case with Governor Mitt Romney? Associated Press reporter Glen Johnson writes about Romney's "candor gap" in this Yahoo News story:

As a presidential contender, Mitt Romney has the looks, the money and the campaign machine. He also has something of a candor gap.

When confronted with questions that might conflict with his message of the day or political record, the Republican candidate has shown a tendency to bob and weave or simply dismiss history. He has done so all year, providing an easy target for his opponents...

Romney started the year with a similar example of candor deficiency.

On Jan. 8, when he staged a "National Call Day" to kickoff his campaign, he called a news conference to herald his unprecedented one-day take of $6.5 million. When the multimillionaire was asked whether he might spend his own money on his campaign, Romney said that scenario "would be akin to a nightmare," since he was relying on popular support for his campaign. He added that he reserved the right to donate, though.

In reality, Romney had already donated to his political committee at the time of the question. A campaign finance report he released in mid-April revealed he contributed a $2.35 million check by the time of his "nightmare" comment, starting the prior October.

He has gone on to loan a total of $17.35 million to his committee, although the total could be more. His next report won't be made public until the end of January.

As the year has progressed, there have been more examples, not just of artsy language, but of ignorance of or embellishments about his personal and political history.

In April, Romney said, "I've been a hunter pretty much all my life," only to have aides reveal he had gone hunting only twice at the bookends of his life: once, during a summer visit to an Idaho ranch as a 15-year-old, and again, in 2006, when he participated in a big-donor excursion to a Georgia game preserve on behalf of the Republican Governors Association.

A subsequent check with state officials revealed no hunting license for Romney in any of the three states where he has homes, and Romney himself later confirmed he did not own any guns. The ones in his house, which he had mentioned publicly, were owned by his son Josh.

More recently, Romney told a national television audience on Dec. 16 that he had been endorsed by the NRA while running for governor in 2002.

A day after his appearance on NBC's "Meet the Press," Romney told reporters that he had checked with the gun-rights group "and they said, 'Well, we didn't give you the official endorsement,' but they phone-banked members ... in Massachusetts, encouraging them to support my candidacy, so it was, if you will, a support phone bank, which is not an official endorsement."

The hunting gaffe in particular has provided easy shots for other candidates. "I don't go around saying I was lifelong golfer because I once rode in a golf cart when I was eight years old," Huckabee said, adding that, "You are not going to hear me making up stuff about my biography."