Did NOW Ignore the Assassination of Benazir Bhutto Because She Opposed Abortion? 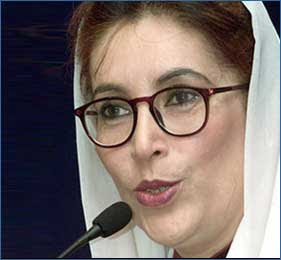 Last Friday in NRO's "Best of the Web" feature, James Taranto observed the inexplicable failure of the National Organization for Women to respond in any way to the assassination of Benazir Bhutto. In today's column he follows that matter a bit farther:

...But it's not that NOW doesn't remember the dead. A reader calls our attention to a statement on the organizations Web site titled "NOW Mourns Loss of Feminist Leader Judith Meuli." We hadn't heard of her, but it turns out she created "a line of feminist jewelry" and also donated a bundle to NOW:

Judith Meuli, 69, died at her home in California after a long battle against cancer. Meuli, a woman of many talents, edited the National NOW publication "Do it NOW" for many years with her partner Toni Carabillo (who died in 1997), was president of Los Angeles NOW, created with Carabillo a line of feminist jewelry that raised money for NOW and the Equal Rights Amendment campaign, and co-authored with Carabillo and June Bundy Csida "The Feminist Chronicles," a detailed history of the modern women's movement.
Several readers also called our attention to a LifeNews.com remembrance of Bhutto:

Bhutto was a member of an international pro-life women's movement that understood abortion causes medical, mental health and other problems for women.

When Bhutto was the prime minister of Pakistan, she helped lead a delegation to the 1994 Cairo population conference that confronted abortion advocates looking to make abortion an international right.

"I dream . . . of a world where we can commit our social resources to the development of human life and not to its destruction," she told the United Nations panel at the time.

No wonder NOW isn't interested in Bhutto. A real feminist is one who is interested in feminine things like jewelry and abortion.
Posted by DH at 1:08 PM