Despite the Democrats and the Media, 2007 Was A Very Good Year for George W. Bush 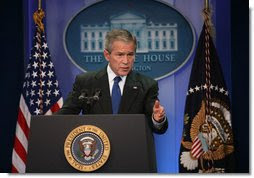 Against all odds, and despite the usual drumbeat of criticism, President Bush has had a very good year. The troop surge in Iraq is succeeding. America remains safe from terrorist attacks. And the Goldilocks economy is outperforming all expectations.

At his year-end news conference, Mr. Bush stated with optimism that the economy is fundamentally sound, despite the housing downturn and the sub-prime credit crunch. The very next day, that optimism was reinforced with news of the best consumer spending in two years...

Bush's optimism is well-earned, in Congress too. He has stopped a lot of bad legislation on higher taxing and spending. He won on S-CHIP and the alternative minimum tax. He mostly prevailed on domestic spending. And he got much of what he wanted on war funding without any pullout dates.

And he's not yet finished. In the most dramatic statement of his holiday news conference, Mr. Bush said he will not stand for the continuing congressional proliferation of pork-barrel earmarks.

"Another thing that's not responsible is the number of earmarks the Congress included in the massive spending bill," said Mr. Bush. "The bill they just passed includes about 9,800 earmarks. Together with the previously passed defense spending bill, that means Congress has approved about 11,900 earmarks this year. And so I am instructing budget director James Nussle to review options for dealing with wasteful spending in the omnibus bill."

Here's the rest of Lawrence Kudlow's column, courtesy the New York Sun.
Posted by DH at 10:27 AM