Defender of Abortionists Caught in His Own Nightmare 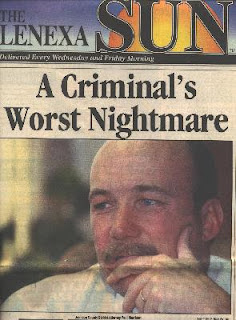 The Lenexa Sun headline on the left seems a bit ironic after the recent news about Paul Morrison.

Morrison, you'll remember, is the pro-abortion Democrat currently serving as the Attorney General for Kansas -- a fellow who has made plenty of headlines being the aggressive foe of Phil Kline, the former A.G. who dared to go after Planned Parenthood for various illegalities. Indeed, since claiming Kline's old job, Morrison has not only dismissed Kline's charges against Planned Parenthood and George Tiller, but he has shut off investigation of the abortion businesses altogether. This despite confiscated records seeming to show evidence of child abuse, illegal late-term abortions and misinformation to state agencies.

But now Paul Morrison has his own problems with coercive, shameful illegalities. For not only are Kansans discovering that the guy is an adulterer whose courthouse copulation was played out during working hours, but if the allegations being made by his office lover prove correct, they'll see that Morrison stooped so low as to engage in sexual harassment in his zeal to defend abortionists.

It looks likely that his days as Kansas' A.G. are numbered.

Here's the story in today's Washington Times.
Posted by DH at 7:34 AM