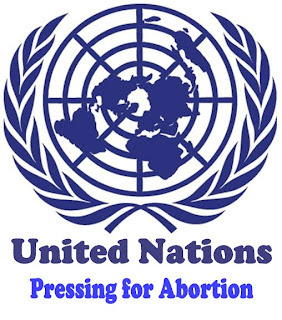 Though not a single U.N. human rights treaty mentions abortion, treaty bodies have pressured 93 nations 122 times to legalize abortion in the last decade, says the executive vice president of a lobbying group.

In this interview with ZENIT, Susan Yoshihara of the Catholic Family & Human Rights Institute (C-FAM), discusses a recently released document she co-authored with Douglas Sylva titled "Rights by Stealth." The white paper explains how tactics by U.N. treaty bodies are being used to promote the legalization of abortion without the awareness or consensus of member states. It's an important article -- one that I hope will encourage you to pray against these sinister actions of U.N bureaucrats and to keep raising the awareness of family, friends and politicians to the very real dangers the U.N poses to life and liberty.
Posted by DH at 8:16 AM