Brainless Brain Surgeons: And This Is Before We Get Socialized Medicine. 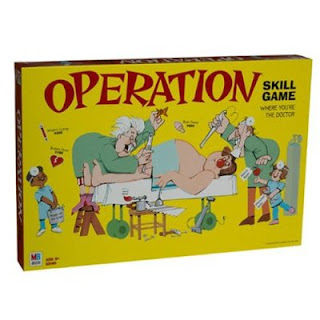 The phrase, "It's not brain surgery" can no longer be used to characterize something intellectually simple. Not when we've got brainless brain surgeons like those operating in Rhode Island.

Rhode Island Hospital in Providence has been fined $50,000 and reprimanded by the state Department of Health after its third instance this year (!) of a doctor performing brain surgery in the wrong side of a patient's head.

The late night talk show fellows won't need writers to come up with jokes about this deal.

And yet the best joke of all (given that the situation itself is quite serious) is simply the calm understatement of health department director David R. Gifford said, "We are extremely concerned about this continuing pattern." Golly, not as concerned as the folks who have to go under the knife in Rhode Island.
Posted by DH at 11:08 AM