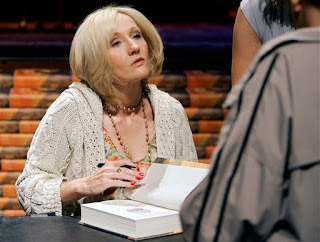 Just when you thought it was safe to immerse kids in books about witchcraft, J.K. Rowling has to succumb to political correctness and “out” Hogwarts Headmaster Albus Dumbledore.

This is well after the fact, of course. Her seven Harry Potter books have sold more than 450 million copies and made her a billionaire. So why make Dumbledore, a beloved authority figure to millions of kids, out to be homosexual?

No one can plumb Rowling’s motives except God Almighty. Some suggest that her announcement last Friday at Carnegie Hall is merely a promotional ploy. The news may well lead to another run on the book series, with sexually confused kids and the Village People desperately seeking clues to Dumbledore’s closeted adventures.

The media are acting in concert, barely able to disguise their cheerleading. A Culture and Media Institute review of 125 stories on Nexis from Friday through Tuesday turned up only one source – an online Scottish edition of The Express – that included a single critic of Rowling’s decision. The rest either took a neutral line or liberally quoted activists who hail the fact that Dumbledore’s likeability and moral authority will help sell acceptance of homosexuality...

As to Rowling, my guess is that she made her shocking revelation in order to pander to the cultural elites who regard celebration of homosexuality as a mark of sophistication. She’s already rich. Perhaps now she wants to be loved by the media and Hollywood. It’s the ultimate liberal litmus test, and it drives a wedge between traditional religious believers and the hip, kaleidoscopic sexual deviancy that is engulfing us from every which way...

(Source: Robert Knight's latest article over at Human Events, "Dumbledoring Down the Culture." Knight is the director of the Culture & Media Institute, a division of one of our favorite band of "watchmen on the wall," the Media Research Center. He also has worked as a L.A.Times news editor and writer, held fellowships at both the Hoover Institution and Heritage Foundation, and founded the Culture & Family Institute at Concerned Women for America and the Family Research Council's Cultural Studies Department. This is a guy to pay attention to!)
Posted by DH at 9:36 AM