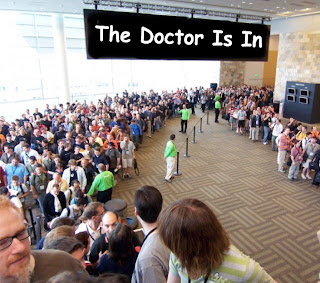 Last week I pointed out that Michael Moore, maker of the documentary "Sicko," portrayed the Cuban health-care system as though it were utopia -- until I hit him with some inconvenient facts. So he backed off and said, "Let's stick to Canada and Britain because I think these are legitimate arguments that are made against the film and against the so-called idea of socialized medicine. And I think you should challenge me on these things."

One basic problem with nationalized health care is that it makes medical services seem free. That pushes demand beyond supply. Governments deal with that by limiting what's available.

That's why the British National Health Service recently made the pathetic promise to reduce wait times for hospital care to four months.

The wait to see dentists is so long that some Brits pull their own teeth. Dental tools: pliers and vodka.

One hospital tried to save money by not changing bed sheets every day. British papers report that instead of washing them, nurses were encouraged to just turn them over.

Government rationing of health care in Canada is why when Karen Jepp was about to give birth to quadruplets last month, she was told that all the neonatal units she could go to in Canada were too crowded. She flew to Montana to have the babies.

"People line up for care; some of them die. That's what happens," Canadian doctor David Gratzer, author of The Cure, told "20/20". Gratzer thought the Canadian system was great until he started treating patients. "The more time I spent in the Canadian system, the more I came across people waiting. You want to see your neurologist because of your stress headache? No problem! You just have to wait six months. You want an MRI? No problem! Free as the air! You just gotta wait six months." ...

Feeling sick now? You oughta' be. But if the next President of the United States really pursues a "socialized medicine" scheme, it'll be awhile before you'll see a doctor. My suggestion then? Go ahead and read the rest of John Stossel's column; then take two aspirins, lie down for awhile, and then get up with a new resolve to work for candidates who truly have the "health" of America in mind.
Posted by DH at 3:19 AM