Sailing Into A Trap: U.S. Navy Demobilizes As Cold War Heats Up 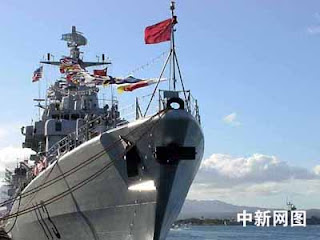 Did you know that China could become the world’s leading naval power by 2020? That’s the verdict of military analyst Tony Corn. This may help explain why the U.S. Navy thinks a piece of paper called the U.N. Law of the Sea Treaty provides some sort of protection for American forces on the high seas. It offers no such protection, of course, but it creates the impression that Navy leaders are doing something about our increasing weakness and vulnerability. However, like so many other U.N. treaties, including the 19 anti-terrorism treaties in effect on 9/11, this one offers a false sense of security. It will mask a dramatic decline in our military power. (Cliff Kincaid, Editor of the Accuracy in Media Report.)

Read the rest of this unnerving but very important article, including its analysis of how naive and dangerous are U.S. plans to demobilize our naval powers while Communist China is vastly extending her fleets. You'll find it right here.
Posted by DH at 1:28 PM