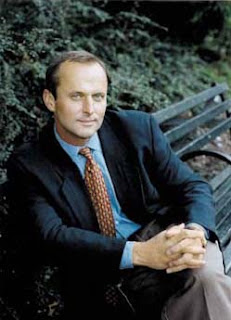 I have never read a John Grisham novel. And after reading this article, revealing as it does Mr. Grisham's arresting lack of propriety and judgment, I'm pretty sure I never will. I mean, "outing" himself as a Democrat who has campaigned for Bill Clinton and John Kerry is one thing. And throwing a fund-raising party for Hillary Clinton is another.

But the imbalance and childish acrimony he shows in the following statements (perhaps affected by the Barry Manilow Syndrome) really takes it over the wall.

Speaking of the Bush administration, Grisham says, "I can't stand those people - and their incompetence is astounding...I've always thought that they were bad people with evil intent - and all that, it's playing out now. You can't hardly look at any aspect of the government in the seven years so far that's been run properly."

"I always thought you could at least depend on the Republican Party to maintain some semblance of fiscal responsibility. But they run up record deficits - taking care of billionaires that they want to take care of. Don't get me started on politics. I could go for a long time."

Now just how Hillary Clinton, as she presides over a Democrat nanny state, will maintain a "better semblance of fiscal responsibility" than the Bush administration, he does not tell. But then, making his own millions through works of fiction, it may be somewhat understandable how, in politics also, Mr. Grisham prefers fantasy to facts.
Posted by DH at 11:07 AM