Is "Wild Capitalism" the Cause of Russia's Assassinations? 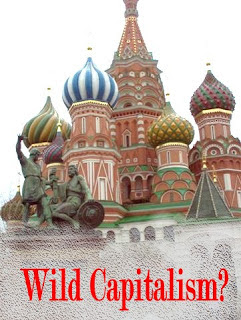 A top Russian investigator was shot dead on Thursday as he walked out of a restaurant in central Moscow in an apparent contract killing, the Kommersant daily reported. Nazim Kaziakhmedov was shot twice in the chest and once in the head by an attacker dressed in black and wearing a baseball cap, Kommersant said on Friday, citing officials.

Kaziakhmedov was working on a major fraud case involving investment group Finvest and was a member of the newly-formed investigative committee of the Russian prosecutor's office, Kommersant said.

Shoot-outs and contract killings are less frequent in Moscow than they were during the so-called "wild capitalism" years of the 1990s...

Don't you love how this AFP reporter manages to twist this shocking and very important story into a denunciation of "wild capitalism," even suggesting it was the the source of the street violence of the 90's...and perhaps now too?

Not the Russian mafia. Not the corruption and incompetence of the regime and its police. Not the absence of morality caused by generations of Communism. But "wild capitalism." Sigh.

Thus does the reporter irresponsibly distract the reader's attention from the central issue; namely, the multi-layered malfeasance, dishonesty, profiteering, and violence that marks modern Russia.
Posted by DH at 10:10 AM