Democracy: George Soros is known for funding groups such as MoveOn.org that seek to manipulate public opinion. So why is the billionaire's backing of what he believes in problematic? In a word: transparency.

How many people, for instance, know that James Hansen, a man billed as a lonely "NASA whistleblower" standing up to the mighty U.S. government, was really funded by Soros' Open Society Institute , which gave him "legal and media advice"? That's right, Hansen was packaged for the media by Soros' flagship "philanthropy," by as much as $720,000, most likely under the OSI's "politicization of science" program. 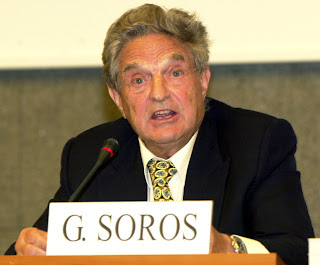 That may have meant that Hansen had media flacks help him get on the evening news to push his agenda and lawyers pressuring officials to let him spout his supposedly "censored" spiel for weeks in the name of advancing the global warming agenda. Hansen even succeeded, with public pressure from his nightly news performances, in forcing NASA to change its media policies to his advantage. Had Hansen's OSI-funding been known, the public might have viewed the whole production differently. The outcome could have been different.

That's not the only case. Didn't the mainstream media report that 2006's vast immigration rallies across the country began as a spontaneous uprising of 2 million angry Mexican-flag waving illegal immigrants demanding U.S. citizenship in Los Angeles, egged on only by a local Spanish-language radio announcer?

Turns out that wasn't what happened, either. Soros' OSI had money-muscle there, too, through its $17 million Justice Fund. The fund lists 19 projects in 2006. One was vaguely described involvement in the immigration rallies. Another project funded illegal immigrant activist groups for subsequent court cases.

So what looked like a wildfire grassroots movement really was a manipulation from OSI's glassy Manhattan offices. The public had no way of knowing until the release of OSI's 2006 annual report...

And there's still more. Read the rest of this Investor's Business Daily editorial right here.
Posted by DH at 10:51 AM