Learning the Real Lessons of Vietnam 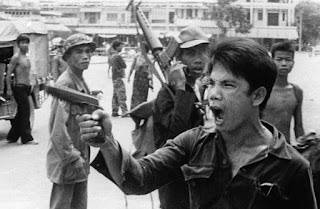 One of the "must-reads" from this last weekend certainly has to be Mark Steyn's "Withdrawl Recalled," published in the Opinion section of the New York Sun. It begins...

George W. Bush gave a speech about Iraq last week, and in the middle of it he did something long overdue: He attempted to appropriate the left's most treasured all-purpose historical analogy. Indeed, Vietnam is so ubiquitous in the fulminations of politicians, academics and pundits we could really use anti-trust legislation to protect us from shopworn historical precedents. But, in the absence thereof, the President has determined that we might at least learn the real "lessons of Vietnam."

"Then as now, people argued the real problem was America's presence and that if we would just withdraw, the killing would end," Mr. Bush told the Veterans of Foreign Wars convention. "Many argued that if we pulled out there would be no consequences for the Vietnamese people. A columnist for The New York Times wrote in a similar vein in 1975, just as Cambodia and Vietnam were falling to the communists: 'It's difficult to imagine,' he said, 'how their lives could be anything but better with the Americans gone.' A headline on that story, date Phnom Penh, summed up the argument: 'Indochina Without Americans: For Most a Better Life.' The world would learn just how costly these misimpressions would be."

I don't know about "the world," but apparently a big chunk of America still believes in these "misimpressions." As The New York Times put it, "In urging Americans to stay the course in Iraq, Mr. Bush is challenging the historical memory that the pullout from Vietnam had few negative repercussions for the United States and its allies."

Well, it had a "few negative repercussions" for America's allies in South Vietnam, who were promptly overrun by the north. And it had a "negative repercussion" for the former Cambodian Prime Minister, Sirik Matak, to whom the U.S. Ambassador sportingly offered asylum. "I cannot, alas, leave in such a cowardly fashion," he told him. "I never believed for a moment that you would have this sentiment of abandoning a people which has chosen liberty ... I have committed this mistake of believing in you, the Americans." So Sirik Matak stayed in Phnom Penh and a month later was killed by the Khmer Rouge, along with the best part of two million other people. If it's hard for individual names to linger in The New York Times' "historical memory," you'd think the general mound of corpses would resonate...

The rest of this edgy, important article is here.
Posted by DH at 11:09 AM