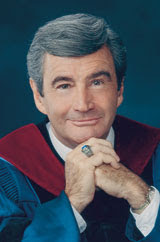 Dr. D. James Kennedy, senior pastor of Coral Ridge Presbyterian Church has formally retired. Dr. Kennedy, 76, suffered a cardiac arrest four days after preaching his last sermon (a Christmas Eve service) and has since been unable to return to the pulpit.

“We thank the Lord for His faithfulness to my father over nearly one-half century, through the impact this church has made in the lives of people in this congregation and community and the influence he has had on countless individuals around the world through radio and television,” said daughter Jennifer Kennedy Cassidy.

And we say a hearty amen.

For more on this story, go to the formal press release. It has more details, several moving tributes to Dr. Kennedy's superb ministry, and the plans for the church's future.
Posted by DH at 10:34 AM