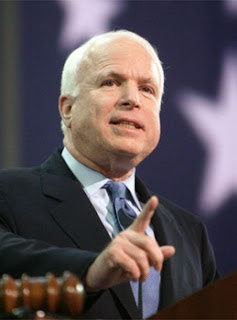 Despite John McCain's inept campaign thus far, Michael Crowley of The New Republic is still afraid of him. And as this brief piece from TNR's The Plank shows, a major reason for Crowley's angst is McCain's connections of the various values of a culture of life. Here's the item:

Delayed reaction: I was traveling yesterday and belatedly listened to a podcast of the August 5 Republican debate aired on ABC's This Week. Did John McCain really call abortion a "national security issue"? Yes, he did!

"I think the respect and commitment to the rights of the unborn is something I've fought for, and it has a lot to do with national security. Because it depends on -- it says very much what kind of a country we are and our respect for human life, whether it be here in the United States or whether it be in China or Bangladesh or the Congo or anyplace else in the world. So I think it is connected."

Hmm, there's a novel theory. Meanwhile I noticed that McCain was on both "Larry King Live" and "The Daily Show" last night (promoting his new book, Hard Calls). That's one reason why I'm not sure McCain's campaign is hopelessly doomed. What other candidate can command that kind of free media?
Posted by DH at 9:50 AM