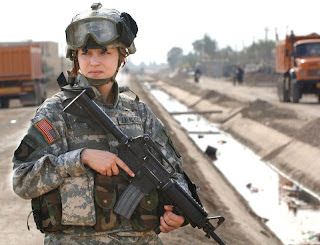 First, and simply, I suggest that there is no manly virtue in causing or intentionally allowing the inherent beauty and charm of young womanhood to be grievously disfigured by physical and psychic wounds of war. Nor is there any moral imperative that obliges an infant daughter to surrender her mother for long deployments or forever, as a dead crew"man" on the USS Cole, for example – whose former C.O. later said, "...we didn't have women; we had sailors." Thus, he expressed the modern diversity doctrine’s “gender-blindness.” Perhaps the Christian sage and veteran soldier, C. S. Lewis, had something relevant in mind when in The Chronicles of Narnia, "Father Christmas" instructs Lucy not to fight in the battle, because "battles are ugly when women fight."

(Significantly, the popular Narnia film’s director was uneasy about audience response to such a “sexist” statement, so he simply revised it, to: “…battles are ugly.”)

Let’s consider a question, unasked and unanswered in behalf of the American body politic by the predominantly male Congress that integrated all federal military academies in 1976: "By what high principle might honorable, kind and loving men encourage and enroll women in the armed forces to kill and be killed on their behalf?

What respectable criterion (if any) of national and personal manhood is expressed by men's dependence on women to confront and kill mortal enemies – for the protection, safety and comfort of able men at ease? Boys and girls, juveniles, depend on their mothers to guard and protect them; but we men?...

Navy Captain (Ret.) Robert H. Miller writes a compelling piece (with a lot more to think about even than this provocative opening) which is printed in full at Reasoned Audacity, the fine conservative blog hosted by Jack & Charmaine Yoest. That essay, and Jack's intro to it, is right here.
Posted by DH at 9:50 AM