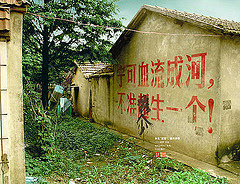 "Speaking out for the baby"

Wow. That was the sub-heading at the conclusion of this abortion-related article that confirmed it to be quite different than what is usually served up by the mainstream media on the subject. I urge you to read through it too and see if you agree.

The specific issue under consideration is forced abortion, the horrendous human rights abuse with which Communist China targets her own citizens. But the story isn't done by Focus on the Family or National Review; it is a report done by the Associated Press and is published, in this case, at MSNBC.

Here are the first few paragraphs:

Qian'an, China - Yang Zhongchen, a small-town businessman, wined and dined three government officials for permission to become a father. But the Peking duck and liquor weren’t enough. One night, a couple of weeks before her date for giving birth, Yang’s wife was dragged from her bed in a north China town and taken to a clinic, where, she says, her baby was killed by injection while still inside her.

“Several people held me down, they ripped my clothes aside and the doctor pushed a large syringe into my stomach,” says Jin Yani, a shy, petite woman with a long ponytail. “It was very painful. ... It was all very rough.”

Some 30 years after China decreed a general limit of one child per family, resentment still brews over the state’s regular and sometimes brutal intrusion into intimate family matters. Not only are many second pregnancies aborted, but even to have one’s first child requires a license.

Seven years after the dead baby was pulled from her body with forceps, Jin remains traumatized and, the couple and a doctor say, unable to bear children. Yang and Jin have made the rounds of government offices pleading for restitution — to no avail...
Posted by DH at 1:52 AM