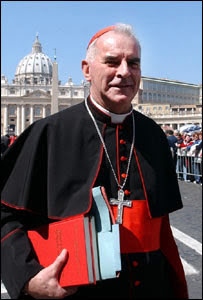 "As a matter of conscience and with great sadness I have decided to resign from Amnesty International having first joined as a student and supported it over many decades.

"Throughout my priestly ministry and more recently as Archbishop and Cardinal I have shown my desire along with my Church to defend life in all its aspects."

Cardinal O'Brien recently outraged pro-abortion zealots by comparing the U.K.'s abortion rate to "two Dunblane massacres a day," referring to the crazed killings at a Scottish primary school in 1996 which left 18 dead. He has also dared the political-correctness of our day by strongly warning Catholic voters and politicians of the severe spiritual consequences of supporting abortion, an illustration of which you can see in this previous Vital Signs Blog post. Thus, the Cardinal's resignation from Amnesty International is simply a continuance of his pro-life principles and an excellent example for the rest of us.

Therefore, before the dust settles on this latest important defection from its ranks, why not send another letter and/or e-mail along to Amnesty International urging them to immediately change their new (and remarkably counter-productive) stand. You can look at any one of these previous Vital Signs Blog posts for contact information and hints at what to put in your letter. One; two; three; four; etc. Thanks.
Posted by DH at 10:19 AM