Racism is in the Eye of the Beholder: Reporters React to ABC's "Cavemen" 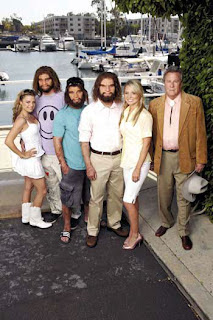 James Taranto's "Best of the Web" column gives us the following observation of how peculiarly astute are MSM reporters:

"The producers of ABC's new 'Cavemen' said Wednesday the comedy is much more than the insurance company commercials that inspired it, but isn't designed to be an ambitious allegory about race," the Associated Press reports from Beverly Hills, Calif.

Huh? If "Cavemen" is not "an ambitious allegory about race," why would it even occur to the producers to deny that is what it is? We checked the photos from the show on the Internet Movie Database, and all of the characters appear to be paleolithoids of pallor. Whose idea was it that there was some sort of racial overtone here?

Still scratching our head, we returned to the AP dispatch and made our way to the fifth paragraph:

[Mike] Schiff and fellow producers responded to reporters' questions about the series, many of them focusing on parallels between the cavemen and black stereotypes and the pitfalls of turning an ad into a series.

Aha! So reporters saw "cavemen," thought "black people," and started asking questions based on their own stereotypes.

Don't they teach racial sensitivity in journalism school out in California?
Posted by DH at 7:24 AM