The Hypocrisy and Ineffectiveness of "Green Consumerism" 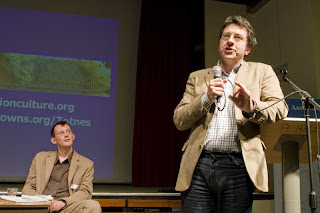 George Monbiot, himself a liberal political writer and environmental activist, nevertheless uses this edition of his weekly Guardian (U.K.) column to throw some cold water on what has become an overheated "green chic" consumerism.

...There is an inherent conflict between the aspirational lifestyle journalism that makes readers feel better about themselves and sells country kitchens, and the central demand of environmentalism - that we should consume less. "None of these changes represents a sacrifice," Goldsmith tells us. "Being more conscientious isn't about giving up things." But it is if, like her, you own more than one home when others have none. Uncomfortable as this is for both the media and its advertisers, giving things up is an essential component of going green. A section on ethical shopping in Goldsmith's book advises us to buy organic, buy seasonal, buy local, buy sustainable, buy recycled. But it says nothing about buying less.

Green consumerism is becoming a pox on the planet. If it merely swapped the damaging goods we buy for less damaging ones, I would champion it. But two parallel markets are developing - one for unethical products and one for ethical products, and the expansion of the second does little to hinder the growth of the first. I am now drowning in a tide of ecojunk. Over the past six months, our coat pegs have become clogged with organic cotton bags, which - filled with packets of ginseng tea and jojoba oil bath salts - are now the obligatory gift at every environmental event. I have several lifetimes' supply of ballpoint pens made with recycled paper and about half a dozen miniature solar chargers for gadgets that I do not possess.

Last week the Telegraph told its readers not to abandon the fight to save the planet. "There is still hope, and the middle classes, with their composters and eco-gadgets, will be leading the way." It made some helpful suggestions, such as a "hydrogen-powered model racing car", which, for £74.99, comes with a solar panel, an electrolyser and a fuel cell. God knows what rare metals and energy-intensive processes were used to manufacture it. In the name of environmental consciousness, we have simply created new opportunities for surplus capital.

Ethical shopping is in danger of becoming another signifier of social status. I have met people who have bought solar panels and wind turbines before they have insulated their lofts, partly because they love gadgets but partly, I suspect, because everyone can then see how conscientious and how rich they are. We are often told that buying such products encourages us to think more widely about environmental challenges, but it is just as likely to be depoliticising. Green consumerism is another form of atomisation - a substitute for collective action. No political challenge can be met by shopping.

The middle classes rebrand their lives, congratulate themselves on going green, and carry on buying and flying as much as before. It is easy to picture a situation in which the whole world religiously buys green products and its carbon emissions continue to soar...

Here's the rest of this interesting article.
Posted by DH at 9:01 AM