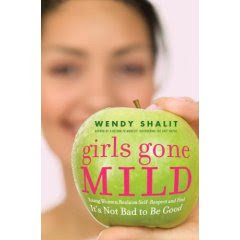 Wendy Shalit is loathed by a certain kind of feminist. When as a twentysomething college graduate she published her first book, A Return to Modesty, she was scorned by The Nation's Katha Pollitt as a "twit," a "professional virgin" who should be given the task of designing "new spandex chadors for female Olympians." Others were less civil.

Shalit, who had raised eyebrows even while at Williams College for opposing co-ed bathrooms in student dorms, has now probably put herself even further beyond the pale by marrying young, giving birth to a son, and looking radiantly happy on the jacket cover of her new book, Girls Gone Mild.

Her skepticism about the bacchanal we call modern sex is undiminished. The book opens with a discussion of Bratz dolls (sold by MGA Entertainment), apparently aimed at ages "four-plus." "Bratz Babyz makes a 'Babyz Nite Out' doll garbed in fishnet stockings, a hot-pink micromini, and a black leather belt . . . . the baby also sports a tummy-flaunting black tank paired with a hot-pink cap. 'These Babyz demand to be lookin' good on the street, at the beach, or chillin' in the crib.'" Another of the dolls wears heavy red lipstick and bright toenail polish to match red panties. One is almost reduced to sputtering.

For the slightly older set, the "tweens" (girls between 9 and 12), Target markets thong underwear. Apparently you can find "Care Bear" thongs at some retailers and "push-up" bras at Kohl's for the first-time bra purchaser.

Read the rest of Mona Charen's fine column here.
Posted by DH at 7:46 AM