The ACLU: Hype, Hypocrisy and an Ongoing Hatred of America 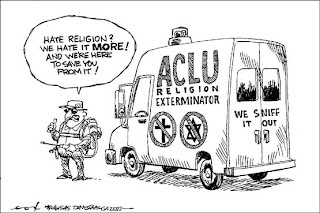 For the past forty years the ACLU has used every legal machination to make the display of Christmas trees illegal if placed in a public institution or on property where there is even the remotest connection to a tax dollar. They’ve bludgeoned America with their claim that such displays violate the separation of church and state. The display of the Ten Commandments? Illegal, they say. Prayer in school? Prohibited, they charge. The mere mention of God at a graduation ceremony --- grounds for a law suit. The display of a Menorah -- the next morning the ACLU is at the court steps already litigating.

How strict are they in their interpretation of separation of church and state? In Pittsburgh they went so far as to demand that a municipal parking lot be off limits to those parking there to visit a local Christmas display at a nearby church.

So when the University of Michigan decided to fund $25,000 worth of ritual foot-washers for Islamic students wishing to pray, one assumed the ACLU would yell foul. After all, it is a public institution, receiving federal and state taxes and using that money for a religious device whose purpose is to facilitate prayer. Not only did the ACLU not object but it also supported the expenditure as “reasonable,” something it can never bring itself to say when activities are for Judeo-Christian expression or symbols...

...Hard as it is to believe, there are people here -- an enemy within -- who hate this country. They are not nationalists but trans-nationalists. Ironically, they come from those who have prospered here and now believe they are better than the average Christian of Faith who is White. Their loyalties are not to America but a cosmopolitan, very secular set of beliefs. Historic America stands in the way they wish to go -- they want it gone and replaced with a totally different set of standards, which they will impose. Those harboring this pernicious mindset often gravitate to and find their natural home in the ACLU.

Most are wealthy and live and play segregated from minorities but champion any minority cause, no matter how odious and destructive, as a way to lessen the standing and comfort of the majority and its "corny" values. When looking at the cases and causes they select, most often it is that which will upset the average Joe’s apple cart. They love representing terrorists wishing to harm America, rarely loyal soldiers sacrificing to defend her. They remain immune, however, for most live a protected, gilded life.

ACLU lawyers specifically seek legal opportunities designed to upend that which we cherish and which makes us who we are: our traditions, habits, sexual discipline and our belief in parental rights and the integrity of the nuclear family. Repeatedly, they argue for the broadest allowance when it comes to supporting the "rights" of those wishing to challenge and undermine historic American norms but insist on the stingiest, most limiting parameters for those with traditional values. Case in point: They have spent years working to outlaw any form of prayer, even silent prayer, in schools when it involved a Judeo-Christian motif but are now utterly silent in a San Diego case (Carver Elementary Public School ) where the superintendent is granting a daily 15 minute prayer slot requested by Moslems that corresponds to that time of day when Moslems pray. It is an intellectual hypocrisy reflecting where their sentiments lie. They have chosen sides, and they are not on our side...

Please read this superb Human Events article in its entirety. It is written by Aryeh Spero, a New York City rabbi whose remarkable talents and energy have been showcased in radio, print and pulpit, well justifying one of his most familiar slogans, "We know what to say, we know how to say it, and we've got the guts to say it!" Rabbi Spero is also President of Caucus for America.
Posted by DH at 9:06 AM