The Religion of Perpetual Outrage 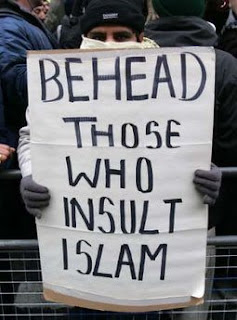 This Michelle Malkin column reports the clear and ever-increasing dangers of Muslim intolerance, dangers that continue to go unreported by the MSM and unchallenged by the political powers of Western civilization. Here is just part of her compelling piece:

In Pakistan, dutiful followers of the jihadi guide have found a new pretext this week for an anti-Western bonfire party: the knighting of author Salman Rushdie in Britain. Muslim groups are burning Queen Elizabeth and Rushdie in effigy. The Union Jack is in flames. The Religion of Perpetual Outrage strikes again.

It's not just some obscure spokesman for a "tiny minority" objecting to Rushdie's knighthood and leading the renewed calls for Rushdie's death and Britain's submission. Pakistan's religious affairs minister, Mohammed ljaz ul-Haq, bellowed: "If someone blows himself up he will consider himself justified. How can we fight terrorism when those who commit blasphemy are rewarded by the West?" He says he was misunderstood, but the message is as loud and clear as the inscriptions on the infamous placards British Muslims waved around during last year's conflagration over the Danish cartoons:

Pakistan's parliamentarian affairs minister Sher Afgan Khan Niazi piled on: "I demand the British government immediately withdraw the title as it is creating religious hatred." On Monday, Pakistan's Parliament passed a unanimous resolution "deploring the honor as an open insult to the feelings of the world's 1.5 billion Muslims." Mufti Muhammad Basheer-u-Din, Grand Mufti of Kashmir, didn't mince words: "Because of his blasphemy, Salman Rushdie remains an apostate and aggressor on Islam and punishment for such offences is death." Lord Ahmed, the first British Muslim member of the House of Lords, blamed Rushdie for violence past and violence to come: 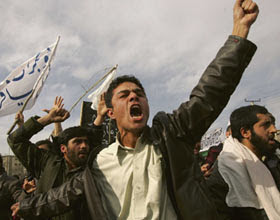 "This man not only provoked violence around the world because of his writings, but there were many people who were killed around the world. . . . Forgiving and forgetting is one thing, but honouring the man who has blood on his hands, sort of, because of what he did, I think is going a bit too far."

The rest of Malkin's column is here. And I also encourage you to follow it up by reading this perceptive piece, "Journey Into Islam," by her Town Hall colleague Tony Blankley.