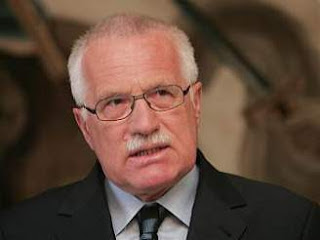 Vaclav Klaus, the former professor of economics who is now the President of the Czech Republic, wrote a bold, enlightening piece last week for the Financial Times about the extreme perils to democracy, the prosperity of a market economy, and even individual liberty posed by...the scare-mongers in the global warming scam.

It is an excellent piece, one to copy and pass around to friends and family who are undoubtedly affected by the constant media drumbeat about global warming. Below is an excerpt but please do click on over and read the whole piece. You'll be glad you did.

We are living in strange times. One exceptionally warm winter is enough – irrespective of the fact that in the course of the 20th century the global temperature increased only by 0.6 per cent – for the environmentalists and their followers to suggest radical measures to do something about the weather, and to do it right now.

In the past year, Al Gore’s so-called “documentary” film was shown in cinemas worldwide, Britain’s – more or less Tony Blair’s – Stern report was published, the fourth report of the United Nations’ Intergovernmental Panel on Climate Change was put together and the Group of Eight summit announced ambitions to do something about the weather. Rational and freedom-loving people have to respond. The dictates of political correctness are strict and only one permitted truth, not for the first time in human history, is imposed on us. Everything else is denounced.

The author Michael Crichton stated it clearly: “the greatest challenge facing mankind is the challenge of distinguishing reality from fantasy, truth from propaganda”. I feel the same way, because global warming hysteria has become a prime example of the truth versus propaganda problem. It requires courage to oppose the “established” truth, although a lot of people – including top-class scientists – see the issue of climate change entirely differently. They protest against the arrogance of those who advocate the global warming hypothesis and relate it to human activities.

As someone who lived under communism for most of his life, I feel obliged to say that I see the biggest threat to freedom, democracy, the market economy and prosperity now in ambitious environmentalism, not in communism. This ideology wants to replace the free and spontaneous evolution of mankind by a sort of central (now global) planning.

The environmentalists ask for immediate political action because they do not believe in the long-term positive impact of economic growth and ignore both the technological progress that future generations will undoubtedly enjoy, and the proven fact that the higher the wealth of society, the higher is the quality of the environment. They are Malthusian pessimists.

The scientists should help us and take into consideration the political effects of their scientific opinions. They have an obligation to declare their political and value assumptions and how much they have affected their selection and interpretation of scientific evidence...
Posted by DH at 10:30 AM