Father of Scientific Climatology: Global Warming A "Bunch of Hooey" 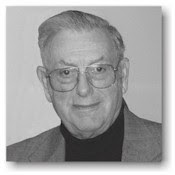 Reid Bryson, known as the father of scientific climatology, considers global warming a bunch of hooey.

The UW-Madison professor emeritus, who stands against the scientific consensus on this issue, is referred to as a global warming skeptic. But he is not skeptical that global warming exists, he is just doubtful that humans are the cause of it.

There is no question the earth has been warming. It is coming out of the "Little Ice Age," he said in an interview this week. "However, there is no credible evidence that it is due to mankind and carbon dioxide. We've been coming out of a Little Ice Age for 300 years. We have not been making very much carbon dioxide for 300 years. It's been warming up for a long time," Bryson said. . . .

Humans are polluting the air and adding carbon dioxide to the atmosphere, but the effect is tiny, Bryson said. "It's like there is an elephant charging in and you worry about the fact that there is a fly sitting on its head. It's just a total misplacement of emphasis," he said. "It really isn't science because there's no really good scientific evidence."

Just because almost all of the scientific community believes in man-made global warming proves absolutely nothing, Bryson said. "Consensus doesn't prove anything, in science or anywhere else, except in democracy, maybe." . . .

So, if global warming isn't such a burning issue, why are thousands of scientists so concerned about it? "Why are so many thousands not concerned about it?" Bryson shot back. "There is a lot of money to be made in this," he added. "If you want to be an eminent scientist you have to have a lot of grad students and a lot of grants. You can't get grants unless you say, 'Oh global warming, yes, yes, carbon dioxide.'"...

Here's the rest of this enlightening article from the Capital Times (Madison, Wisconsin).
Posted by DH at 12:28 PM