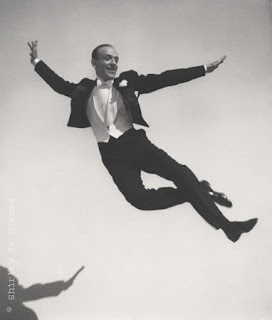 He introduced more hit songs in movies than any singer. He has been rated in the Top Five Hollywood Actors of All Time. Balanchine and Nureyev argued that he was the greatest dancer of the twentieth century.

Not a bad career for a fellow whose initial RKO Pictures screen test was dismissed with these infamous words: "Can't sing. Can't act. Balding. Can dance a little."

The feisty yet fastidious fellow, of course, was Fred Astaire.

And yes, though Vital Signs Blog is normally concerned with the clash of cultural values and you'll read posts dealing with those important matters even in today's rota...at least occasionally it's oh-so-nice to remember pleasanter days, days when Roy rode the range, when Ratty and Mole paddled in the river, and when Fred and Ginger danced their way into our hearts.

Well, here's Mark Steyn (another fellow that appreciates the need, now and then, for a change of pace) writing about the unique character and talent of Fred Astaire. So, before you get back to the business of the day, why not brew up a cup and take five with this terrific article.
Posted by DH at 10:13 AM