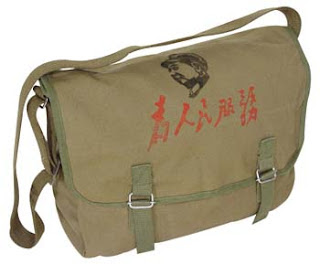 While touring the Incan city of Machu Picchu in Peru's Andes on Friday, actress Cameron Diaz touted an olive green bag emblazoned with a red star and the words "Serve the People" printed in Chinese, one of the most famous (and tragically ironic) political slogans of Chinese Communist thug Mao Zedong.

The bag is just one example of the "Communist chic" fashions sold in trendy fashion spots like Paris, Hollywood and Beijing (where Ms. Diaz purchased hers), but there are some parts of the world where such clueless indifference to the horrific crimes of Communism is not appreciated. And certainly Peru is just such a place where the pain is still acute from the Maoist Shining Path insurgency that conducted a campaign in the 1980s and early 1990s of kidnappings, bombings, assassinations, massacres, and other terrorism that left nearly 70,000 people dead.

Ms. Diaz has apologized for carrying her bag around there. That's good. But what is better is that this story (headlined around the world) may bring to light some facts about what Maoist slogans, Che Guevera T-shirts, and other "Communist chic" fashion really glorify.
Posted by DH at 9:11 AM