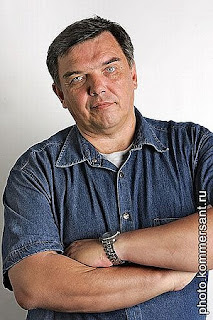 Reuben F. Johnson, writing for The Weekly Standard, describes yet another Russian murder mystery that is going not only unsolved...but tragically unreported as well.

Truth is stranger than fiction--or so the saying goes. Nothing illustrates this more than the intersection of arms salesmen, government spokesmen, press reporting and a series of mysterious events leading up to the Paris Air Show at Le Bourget.

In the first week of March, Ivan Safranov, a retired Russian colonel and correspondent for the last decade at the Moscow newspaper Kommersant, [pictured at top right] was found dead outside of his apartment building. Questions raised about several aspects of his death still remain unanswered.

Safranov lived on the third floor of his building, but he had for some reason fallen from the fifth floor. He was fully clothed and wearing an overcoat, as if he had just returned from a trip to the market. A bag of mandarins was found scattered on the ground near his body. When he landed on the ground he had hit headfirst, which one tends not to do unless they are already unconscious at the time of their fall. Needless to say, if he was unconscious he could not have jumped from the window of the fifth floor without having been “assisted” in the process.

Not surprisingly, the Russian prosecutors assigned to the case wanted to rule his death a suicide, despite all of the evidence to the contrary...

The rest of the article is here and the story from Kommersant about Safranov's death is here.