The Suicide of the West: Mugabe's Genocide Rewarded by the U.N. 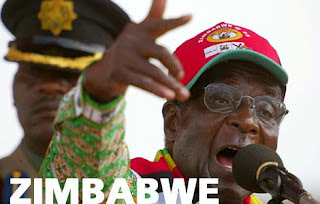 ...I first saw Robert Mugabe in the flesh at a UN Earth Summit in Johannesburg in 2002. His arrival on the podium was preceded by US defence secretary Colin Powell, who was booed and jeered, and by Tony Blair, who met with similar indignities. Mugabe, on the other hand, was greeted by a tumultuous standing ovation. I wrote it off as a passing fad. At the time, black power fanatics were still pumped up over Mugabe’s ethnic cleansing of white farmers, and one assumed their enthusiasm would wear off once the consequences of Mugabe’s folly manifested themselves.

Not so. By 2004, Zimbabwe’s economy was in freefall and his subjects were growing hungry, but Mugabe was more popular than ever. No, not in Zimbabwe. His fans were black people elsewhere. He received standing ovations in many African capitals, and at President Mbeki’s 2004 swearing-in ceremony. By then, it was clear that his ‘fast-track land-reform programme’ had not significantly reversed his unpopularity at home, and he had already taken to bludgeoning black opponents and rigging elections in order to stay in power. His black supporters didn’t care. Mugabe was giving the whites hell. Mugabe was therefore a hero. ‘Mugabe is speaking for black people worldwide,’ wrote the Johannesburg commentator Harry Mashabela.

One assumed this accounted for the Mbeki administration’s reluctance to criticise Mugabe in public. We were told that the situation in Zimbabwe was delicate, and that ‘quiet diplomacy’ offered the best shot at staving off anarchy. For a while this seemed plausible, but in time it became clear that quiet diplomacy was mostly a cover for covert support. When Western members of the Commonwealth moved to expel Mugabe, South Africa helped block them. South Africa also thwarted attempts to place his atrocities on the agenda at the UN Security Council and the UN Human Rights Committee. Meanwhile, the rape of Zimbabwe gained momentum, and Mugabe’s popularity swelled to rock-star proportions. Last year, the cocky little psychopath informed an audience of African-American New Yorkers that his rule had created ‘an unprecedented era of peace and tranquillity’ back home. They gave him a standing ovation.

One understands the wounds of history, but even so one believed there would come a day when Mugabe’s militant fans realised their behaviour was restoring the reputation of Ian Smith, who prophesised that Rhodesia would be ‘buggered’ if the black took over. By the beginning of this year, Smith was utterly vindicated. Eight out of ten Zimbabweans were jobless, and those who had work were screwed anyway, because inflation was 2,200 per cent and they couldn’t afford anything. Hospitals and schools were collapsing, factories closing. Millions were facing starvation. In a report for the Sunday Times four months ago R.W. Johnson interviewed a game ranger who said Zimbabwe’s hyenas were developing a taste for human flesh, the result of scavenging on corpses ‘cast into collective pits like cattle’. He concluded that Mugabe’s misrule had resulted in as many as two million deaths — twice as many as perished in the Rwandan genocide — and that ‘the number is now heading into regions previously explored only by Stalin, Mao and Adolf Eichmann.’

It was against this backdrop that the UN’s Commission on Sustainable Development met to elect a new leader last Friday. The chair of this body rotates between regions; this year it fell to Africa to make an appointment, and African countries were bent on installing Mugabe’s man. Western diplomats initially thought this was some sort of joke, but as the day passed, it emerged that Africans were indeed of the opinion that a body dedicated to fostering development could credibly be chaired by a murderous regime that had reduced a once-thriving nation to absolute penury. The West was dumbfounded. ‘Beyond parody,’ said an Australian newspaper columnist. ‘Appalling,’ said his Prime Minister, John Howard. ‘Preposterous,’ said the American human rights lobby Freedom House. But Africans wangled support from Latin America and their motion was carried...

This Spectator (U.K.) article by Rian Malan will undoubtedly infuriate you. I certainly hope so anyway and, I'm sure, Mr. Malan desires the same end. Why? To underscore once again the irrational "death wish" of Western civilization and to prompt people like you and I to oppose the injustice, the violence and the threat to moral sanity represented by thugs like Mugabe and, yes, the type of dutiful dupes Malan describes in this edgy, excellent piece.
Posted by DH at 6:04 AM