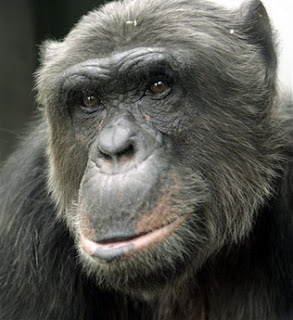 As phrased by lawyer Eberhart Theuer, "Our main argument is that Hiasl is a person and has basic legal rights...We mean the right to life, the right to not be tortured, the right to freedom under certain conditions."

Is Mr. Theuer talking about a unborn child threatened by abortion? A handicapped newborn that doctors are refusing to treat? Perhaps a teenager whose motorcycle crash has left him paralyzed and unconscious but with undamaged internal organs that would fetch a very nice price? What about an elderly woman who is just "taking up space" and thus faces the hospital's preference for euthanasia?

No, I'm afraid the lawyer isn't speaking up for any such people -- people who certainly could use a skilled and principled lawyer to protect them from the culture of death that surrounds us.

No, Mr. Theuer is actually serving as a spokesperson for Association Against Animal Factories, a Vienna animal rights group. And his pursuit of a declaration of personhood is for...a chimpanzee.

Here are a couple of excerpts from this A. P. story.

..."If we can get Hiasl declared a person, he would have the right to own property. Then, if people wanted to donate something to him, he'd have the right to receive it," said Theuer, who has vowed to take the case to the European Court of Human Rights if necessary.

Austria isn't the only country where primate rights are being debated. Spain's parliament is considering a bill that would endorse the Great Ape Project, a Seattle-based international initiative to extend "fundamental moral and legal protections" to apes.

If Hiasl gets a guardian, "it will be the first time the species barrier will have been crossed for legal 'personhood,'" said Jan Creamer, chief executive of Animal Defenders International, which is working to end the use of primates in research...

"When you see Hiasl, he really comes across as a person," Theuer said. "He has a real personality. It strikes you immediately: This is an individual. You just have to look him in the eye to see that."