Homosexual Agenda Stalls in Nebraska with Defeat of LB 475 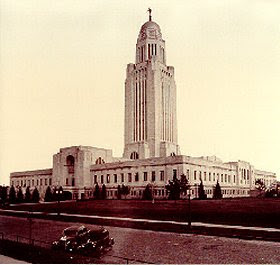 The Nebraska Family Council has passed on this important message:

The debate on LB 475, (Introduced by Sen. Ernie Chambers) came to a sudden end last night. After hours of debate Senators killed the bill. Senator Phil Erdman of Bayard introduced a motion to indefinitely postpone the debate on the bill. We held our breath and prayed as the vote was taken. With the narrowest of margins the motion was successful. Which means this bill is done for the rest of the session.

If this bill had passed it would have prohibited discrimination based upon sexual orientation or marital status in employment. When a law protects a behavior it endorses that behavior. Such a law would create confusion in the minds of children as to appropriate sexual moral behavior.

Senators received countless contacts from individuals. Your calls and prayers did make a difference!

Senator Tony Fulton said:“We each have at our disposal two great weapons; the force of our voice and the force of our heart. Many, many voices spoke and persuaded senators through phone calls, emails and letters on LB 475. Most importantly, many hearts were heard in prayer as I’m certain our Lord sharpened the minds of senators during debate on LB 475. Please, please let everyone who reads this; know they make an enormous difference. I am there and I see it for myself. Be active with heart and voice!!!”

Senator Mark Christensen said: “Thank everyone who prayed and contacted state senators. The contacts from individuals who opposed this bill did so in an honorable and professional manner. I was so thankful for the prayer support and the sense of God’s presence as the bill was debated, we needed His wisdom and strength. Thank everyone for their willingness to pray and do their part to see this bill defeated.”

Thanks again for your prayers and contacts to State Senators. Together we made a difference!