The Assaults on Free Speech About to Increase 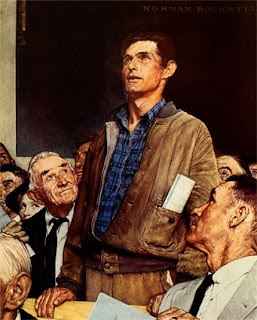 A recent Wall Street Journal/NBC News poll shows 6 in 10 Americans think the Democratic Congress "hasn't brought much change." Eager to change this impression, the Democrats are frantically trying to pass legislation before Memorial Day. First on the agenda is a bill restricting lobbying, which is heading for the House floor with lightning speed. The House Judiciary Committee is expected to pass it tomorrow, sending it to the full House for a final vote next Tuesday or Wednesday.

When a bill moves that quickly, you can bet an someone will try to make some last-minute mischief. Hardly anyone objects to the legislation's requirement that former lawmakers wait two years instead of one before lobbying Congress. Ditto with bans on lobbying by congressional spouses and restrictions on sitting members of Congress negotiating contracts with private entities for future employment.

But the legislation may be amended on the floor to restrict grassroots groups that encourage citizens to contact members of Congress. The amendment, pushed by Rep. Marty Meehan of Massachusetts, would require groups that organize such grassroots campaigns to register as "lobbyists" and file detailed quarterly reports on their donors and activities. The law would apply to any group that took in at least $100,000 in any given quarter for "paid communications campaigns" aimed at mobilizing the public...

...The same groups that backed the McCain-Feingold law, limiting political speech in advance of an election, are behind this latest effort to curb political speech. Common Cause and Democracy 21 say special-interest entities hide behind current law to conceal the identities of their donors, whom they would have to reveal if they were lobbying Congress directly. "These Astroturf campaigns are just direct lobbying by another name," says Rep. Meehan, who is resigning from the House this summer and views his bill as his last hurrah in Congress.

But the First Amendment specifically prohibits Congress from abridging "the right of the people . . . to petition the Government for redress of grievances." The Supreme Court twice ruled in the 1950s that grassroots communication isn't "lobbying activity," and is fully protected by the First Amendment. Among the groups that believe the Meehan proposal would trample on the First Amendment are the National Right to Life Committee and the American Civil Liberties Union. The idea goes too far even for Sen. John McCain, who voted to strip a similar provision from a Senate lobbying reform bill last January.

The possible outcomes are disturbing. For example, Oprah Winfrey operates a website dedicated to urging people to contact Congress to demand intervention in Darfur. If her Web master took in over $100,000 in revenue from Ms. Winfrey and similar clients in a single quarter, he might be forced to make disclosures under the law.

"It's huge," Jay Sekulow of the conservative American Center for Law and Justice, told The Hill newspaper. "It's the most significant restriction on grassroots activity in recent history. I'd put it up there with the 2002 Bipartisan Campaign Reform Act"--the formal name for McCain-Feingold.

McCain-Feingold itself is riddled with loopholes, producing a slew of unintended consequences. Its provisions allowing candidates who compete against wealthy opponents who spend their own money to accept larger-than-normal legal contributions in order to compete inexplicably don't apply to the race for president. That means Mitt Romney and John Edwards, both of whom are independently wealthy, have a clear advantage should they run low on cash and need to inject funds into their campaigns quickly...

Read the rest of this alarming report from John Fund over here at the WSJ Online. And then, by all means, get cracking to let your political representatives know what you think about these unjust attacks on your freedom of speech.
Posted by DH at 7:57 AM