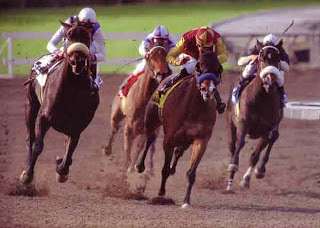 ...Stem cell therapy may be controversial in human medicine but in the world of horse racing it is becoming the odds-on favourite for tackling tendon damage, which accounts for one in three racecourse injuries.

Soon the same technology could be applied to humans...

...Each procedure costs the owner an average of 1,600 to 1,700 pounds but is potentially a good investment if it gets a valuable animal back on the racetrack.

Owners and trainers are reluctant to advertise the injury records of their horses but Mountford said 10 horses in Britain's Cheltenham Festival last month and one runner in the Grand National had undergone the treatment.

Racehorse owners, of course, are used to a gamble and have been happy to take a punt on a technology that promises to fix animals worth thousands, if not millions, of dollars. VetCell has already treated horses throughout Europe, North and South America, the Middle East, Japan, South Africa and Australia....
Posted by DH at 9:40 AM