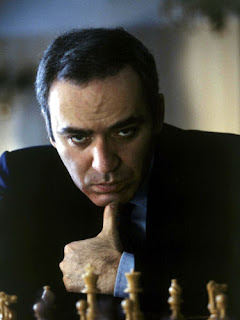 It was so, well, Soviet. This weekend's news clips showed Russian goon squads charging courageous opponents of an authoritarian Kremlin, truncheons flailing, roughing up the dissenters and arresting their leaders. One of those detained on Saturday was Garry Kasparov, the long-time World Chess Champion and a world-class champion of freedom. [Kasparov is pictured at left.]

Although Kasparov was subsequently released, his forcible detention is a sign of the extent of Vladimir Putin's repression and the master of the Kremlin's confidence that the Free World will not protest, let alone punish, the Russian government's ever-more aggressive behavior at home and abroad. If the Kremlin can move with impunity against the most visible, widely admired and gutsy of its critics, no one in Russia is safe. And the world beyond will become more dangerous, too.

Like the refuseniks of the Soviet Union – storied individuals like Andrei Sakharov, Alexandr Solshenitsyn and Anatoly Sharansky – Mr. Kasparov has been a formidable adversary for a government accustomed to having its own way. He has written powerful columns in publications like the Wall Street Journal. He has used his stature as one of history's best practitioners of chess, the national sport of Russia, to speak truth to power on behalf of millions of his countrymen who have become too intimidated to challenge Putin's systematic liquidation of what passed for democracy there.

Most recently, Garry Kasparov has entered the political fray, helping to found Other Russia, a somewhat ungainly coalition of parties from the Left and the Right who have joined forces to challenge Vladimir Putin's creeping totalitarianism and offer a democratic alternative in upcoming elections. The Kremlin has denounced Other Russia as "destabilizing." All other things being equal, the state's violence against the coalition's demonstrations this weekend and Kasparov's arrest will be followed by more draconian measures.

But all other things must not be equal. The Free World and its leader, the United States, must take steps now to help Freedom's Champions like Garry Kasparov in at least as forceful a way as it did when President Reagan assisted the USSR's dissidents...